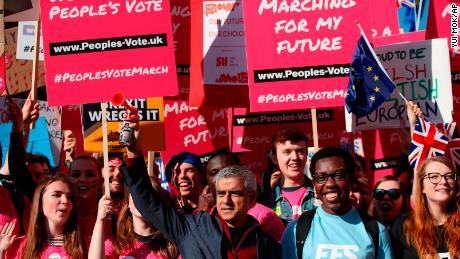 During the EU referendum, Brexit campaigners promised we would continue to enjoy ‘the exact same benefits’ of being in the EU, while ‘taking back control’.

Subsequent events have shown that to be pure fantasy.

The people were misled, the extent of Brexiteers lies have become clear, as so has their willingness to trash the economy, hitting the poorest hardest, to go out on a No Deal Brexit. Even the proposed Brexit deal delivers the exact opposite of what was promised: the UK would lose all its rights as an EU member – with less trade, fewer opportunities and lower living standards – while suffering the biggest loss of sovereignty and control in British history.

Now that we know the truth, we demand another say.

On Wednesday 25th September the BBC’s Editorial Complaints Unit officially found that BBC Breakfast’s presenter Naga Munchetty had breached the corporation’s guidelines by offering a personal opinion on President Donald Trump’s retort to four congresswoman of colour to "go back" to the "places from which they came".

The Editorial Complaints Unit’s decision is a misinterpretation of its own editorial guidelines, wrong in principle, and discriminatory. It is an affront to all journalists of colour and everyone who believes in an equal society that stands against racism.

In 2017 Fanywa Afua, whose given name is Sandrine Toussay, put her life on the line to recall the truth about Christopher Columbus -  the 15th century Genovese navigator, en-slaver and mass murderer, who is glorified in towns and cities around the world - including her hometown of Carbet in Martinique. Fanywa overcom threats and bullying from onlookers to spray paint a plaque at the center of a large monument to Columbus, pointing out that it was celebrating genocide. As a result of her courage, the City Council agreed to launch a public consultation, and the monument has now been renamed in honour of the indigenous people. But as thanks for her role in this historic change, Fanywa is being persecuted through the courts. Stand with her against this injustice.

I support the following protests

Ethnic minorities will be hit harder by Brexit. Brexit runs the risk of widening the racial inequality gap. Ethnic Minorities have been hit hard by hate crime and are also likely to be hit hard by any negative economic impact of Brexit, and rights are also at risk.

The majority of ethnic minorities voted for remain but nobody voted for these risks. That's why we are demanding a People's Vote on any deal.

Join me in my support for the following organisations

Please enter your name.
Please enter a valid email address.
Sign up
You must accept the Terms and Conditions.

Thank you for subscribing!

Something went wrong. Please check your entries and try again.

You can by BRIT(ish) online at the following retailers

Available in hardback, paperback, eBook (including Kindle)
and audiobook